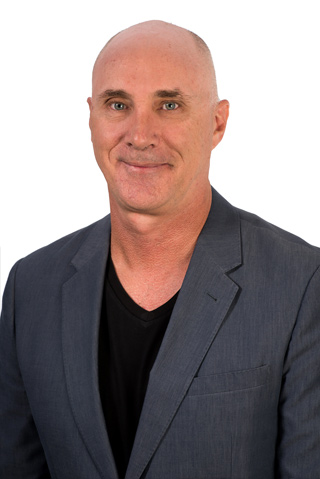 Many of you will already know Roger, and with great reason. Roger has a very clear vision for the business and encourages everyone in our office to strive for excellence, with integrity and precision. He is respected by his team and within the industry and it’s fair to say that his professionalism and loyalty has filtered through to all of us.

Roger has had an extensive career in the media industry, but what some may not know is he also had a long and successful career playing professional AFL for his beloved Port Adelaide.

Roger’s father played amateur league football, so it was a big part of his life growing up and In 1983 he joined Port Adelaide Football Club, who he had grown up barracking for as a child. He was later drafted by the Fitzroy Lions in 1990 but broke his leg in the first game of the year. It took 2 years to recover properly, during which time he returned to play for Port Adelaide. He ended up playing 208 senior games for the club and was lucky enough in his time to play in 6 winning premierships, as well as represent South Australia in State Of Origin. During his time playing for Port Adelaide, he was adorned the nickname Batman in reference to his partnership with his great mate George Fiacchi. Their teamwork was exceptional, and they were soon dubbed Batman and Robin because of the way they played so well together.

After retiring, he became an assistant coach to former Port teammate Mark Williams at Port Adelaide and then took on other senior coaching roles with Amateur clubs in both Adelaide and Sydney coaching 3 teams to premierships.  When he arrived on the Sunshine Coast in 2010 he took up the role of senior coach of the Maroochydore Australian Football Club during the 2011 and 2012 seasons.

Prior to his football career, Roger began his working life at a Customs Clearance Agent down on the wharves at Port Adelaide, and even harbored the desire of becoming a pilot as a child, but unfortunately his fear of flying was not conducive to an aeronautical career.

Following his time at the customs agency he began working in real estate, but this impacted on his work while he was playing and coaching football.  Following this he was offered a job in publishing and unbeknown to him at the time, this would set him on the path to a long, successful career in media. Roger moved on to radio and began working for Austereo Adelaide at SA FM & Triple M. He soon progressed within the company becoming Sales Manager, then moving to Sydney and progressing to the role of Sales Director, where he continued to grow and became part of the national training and executive team. After 10 years with Austero, Roger joined a full service advertising agency, (LA Advertising) as general manager. He spent 3 years in this role before deciding to move with his wife and 3 children to their beloved holiday destination on the Sunshine Coast.

Once on the Coast he purchased a small marketing agency and soon began building new relationships within the industry and reconnecting with others who had also relocated to the region. Roger had previously played football against Trevor Larkins and had met Rick Chapman and Rob Gamble through his radio connections. These relationships proved to be incredibly valuable as a year later, they all  teamed up to establish Sunny Media, and the following year joined up with another close friend in Peppi Bueti to add the Public Relations Agency QAPR to the fold.

The group worked hard to bring in new clients including well established local businesses in Schultz Toomey O’Brien and The Big Kart Track as well as existing clients of both Trevor and Roger.

Roger said the Sunny Media journey is his greatest career achievement to date, he is proud of what the company has become and the opportunities which have been created to employ and teach others.

Roger has many plans for QA and is looking to consolidate and grow in the next 3 years. He is also excited to grow the people who are in the business. He would like to expand QA’s digital capabilities in house, further helping to grow QA’s growing client offering.

Roger says he still gets great joy from getting a great result for his clients and being able to attribute it to what we do. Part of this is due to his analytical nature which highlights true and measured outcomes for clients.

An important part of his work is educating clients who don’t understand media, and the landscape where their audience is placed.

“Many clients are experts in business but not media. We will never understand their business as well as they do, so when we team up with a company and they provide us with extensive information on their company and clientele, we can achieve some great results,” Roger said.

Roger says one of Sunny Media’s biggest challenges is keeping up with the ever-changing media landscape and ensuring the business has quality and committed workforce.

“With online media becoming more and more popular, it is becoming a great accompaniment to traditional media. Online is a fantastic component with most campaigns, but video and online content needs to be relevant.

“There is so much information on these platforms now, that people are very particular with what they choose to watch and read, so it needs to be targeted content to engage people who can now consume this information anywhere anytime on their chosen device,” he added.

Despite the growing popularity of digital and online platforms, TV remains Roger’s most appreciated media as he sees so much value in the visual side of its medium and points to research results that still back it as the biggest influencer on brand and sales in Australia. Having commenced his career in radio, it will also always have a special place in his heart and is also a massive influencer, but he believes all media, if done right, can achieve results.

Roger’s advice to those who would like to start in media is “Learn to love it, and if you don’t, get out quick. Don’t join for the glamour. Join because you like helping the client.”

His moto for success in life and business is to be honest and have integrity and he’s personally driven by the importance of family.

“I firmly believe that if your decision making is based around your personal values and family, you will have success and have an enjoyable life. Nothing is ever perfect, but you always have to try.”

Roger demonstrates these values in his life with his community involvement in a number of activities including being the age manager for his children’s Nippers group and has also been an active patrol member at Coolum Beach for the past few years. He has also assisted in coaching his children’s AFL team which gives him much joy.